Baker Bob was the 12th and last baker killed by Piella Bakewell, the serial killer in A Matter of Loaf and Death. His death appeared in the local newspaper. He is named after scriptwriter Bob Baker. His name was also mentioned in the short film A Close Shave and in the video game Wallace & Gromit in Project Zoo. However, it is unknown whether the character referenced in A Close Shave and Project Zoo is the same baker. 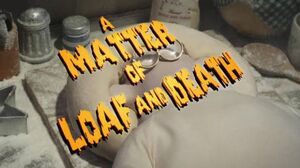 Baker Bob lying dead in A Matter of Loaf and Death
Add a photo to this gallery
Retrieved from "https://wallaceandgromit.fandom.com/wiki/Baker_Bob?oldid=11388"
Community content is available under CC-BY-SA unless otherwise noted.