The Soccamatic is a short film in the Cracking Contraptions series. The film features the invention of the Soccamatic, a device that shoots footballs into the goal.

Wallace and Gromit head to the local football field for a bit of practice, with Wallace playing the field and Gromit playing the goalie. Wallace takes shots while shouting out the names of famous footballers from Preston North End and other teams. Realizing how skillful Gromit is at blocking shots, Wallace activates his Soccamatic - a machine that repeatedly launches balls towards the goal, previously owned by Preston North End in 1938 (The year the contraption was made even on the machine). Gromit ducks as the balls fly past. The machine runs out of balls, but Wallace reloads it via an overhead mechanism that dumps the balls in. Meanwhile, Gromit has pulled on his gloves and pilot gear. Pulling a cord, he inflates his goalkeeper vest and gloves. This completely blocks the goal, enabling the balls to bounce off and promptly Wallace suggests to play tennis instead. After the credits, Wallace in the end hits a ball onto Gromit's inflated vest, attempting to burst it, but instead it did nothing and Wallace yells, "15-love!". 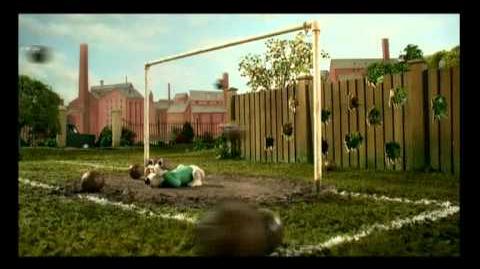 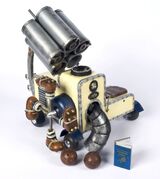 The Soccamatic's model as owned by the National Football Museum in Manchester
Community content is available under CC-BY-SA unless otherwise noted.
Advertisement