Wallace and Gromit Wiki
Register
Don't have an account?
Sign In
Advertisement
in: Films, The Wrong Trousers

A Close Shave (1995)
The Wrong Trousers is a 1993 animated short film directed by Nick Park at Aardman Animations, featuring the characters Wallace and Gromit. It was his second short featuring the eccentric inventor Wallace and his dog Gromit. The film premiered on Boxing Day, 1993 and won the 1994 Academy Award for Animated Short Film.

The short begins at 62 West Wallaby Street on Gromit's birthday. Gromit takes out the mail from the door and walks through but dodges a model train known as the 8:45 and arrives at the table. After falling downstairs from his bed through a trap door in the ceiling (which also dresses him at the same time) and eating toast for breakfast, Wallace is greeted with a large pile of bills. Meanwhile, Gromit subtly attempts to remind Wallace that it is his birthday.

After surveying their depleted funds, Wallace sees another model train known as the 9:05 coming, lets slip that he has not forgotten Gromit's birthday after all and presents Gromit with a somewhat unwelcome gift of a collar and a leash (lead), and a second present of a pair of EX-NASA robot Techno Trousers, designed to relieve the burden of taking him for walkies. Gromit manages to take the collar off and puts it on a toy dog instead, which is then taken for a walk by the Trousers. While Gromit is out on a "walk", Wallace decides that the only solution to their financial problems is to rent out the spare bedroom. Thus, a lodger, a malevolent-looking penguin criminal named Feathers McGraw comes to stay at the house. Unsatisfied with the spare room, Feathers decides to sleep in Gromit's bedroom, forcing Gromit to sleep in the spare room. Feathers keeps Gromit awake at night with his music playing on the radio station Hammond Radio, and wins Wallace's favour. He also gains interest in the Trousers after seeing Gromit use them to walk along the house's ceiling to paint it. Disappointed that Feathers has barged in on his relationship with his master, Gromit leaves home. Viewing his departure, Feathers goes to work on modifying Gromit's biggest birthday present (the Techno-Trousers) for his own nefarious use.

After sleeping rough, Gromit hunts for suitable lodgings, noticing a police poster depicting a criminal penguin with a rubber glove on his head and the caption "Have you seen this chicken?". This makes him begin to suspect that the "chicken" in the wanted poster is, in fact, Feathers.

Meanwhile, Wallace's normal morning routine is interrupted by the replacement of his expected trousers with the modified Techno-Trousers. Trapped inside the robotic garments, Wallace is sent on an extended test run, driven by remote control, although he is unaware of Feathers's involvement. Gromit, seeing this spectacle, later spies on Feathers from inside a box of meatabix as the penguin suspiciously measures up the exterior of the town museum, sneaks back into his old bedroom which was papered by Feathers, and uncovers a dastardly scheme the penguin has devised to steal a giant diamond from the museum using the trousers and Wallace as tools. However, as Feathers arrives back at the house, Gromit finds he is too late to foil the plan and is instead forced to hide inside Wallace's bed, where he observes Feathers in his "chicken" disguise (a large red rubber glove on his head). Realization dawns on Gromit: Feathers is a wanted thief; he'd been stealing from all over the country disguised as a chicken. After the Techno-Trousers left Wallace's bedroom, Gromit went into Wallace's usual clothing back-to-front and his face was covered in jam when there was no toast in the toaster.

Wallace, in his own deep-sleep after the morning's misadventures, is unwittingly brought into the robbery by the penguin, and by nightfall is marched out of the house to the museum. Feathers uses the suction feet on the Trousers to climb the wall, enter the building through an air vent on the roof and march along the ceiling to the diamond, narrowly avoiding the laser burglar alarm system. As the penguin watches from a window sill outside, he carefully uses a claw in Wallace's helmet to hook the diamond. After a close call when the diamond slips and almost falls to the floor, a loose ceiling tile sets the Trousers off balance, swinging the claw into the laser and setting off the alarm. The burglar alarm wakes up a terrified Wallace, who has no idea where he is or how he got there, or what he'd been doing before he got there. Feathers quickly marches Wallace out of the museum after the burglar shutter closed and back to West Wallaby Street, where he reveals his identity to Wallace and locks him up in a wardrobe. Making for the door with the diamond, Feathers is confronted by Gromit with a rolling pin. Feathers then pulls out a pistol and forces Gromit into the wardrobe with Wallace, locking them both inside. Being an expert with electronics, Gromit is able to override the Trousers' circuits and break open the wardrobe door to escape and chase Feathers.

Then follows a fast chase through the house aboard one more model train known as the 22:15, as Gromit attempts to stop the penguin escaping with the diamond, aided and abetted mostly unsuccessfully by Wallace. Wallace, however, does manage to disarm the penguin on the tender behind the engine, he crashes through a wall, and barely fails to catch the penguin, but grabs the engine after the penguin uncouples the train from the tender. After the penguin's train is abruptly stopped by the trousers, he is caught in an empty milk bottle and handed in to the police station by the trousers. In the last scene, he has back home to the zoo and is clinging furiously to the prison-like window bars. For catching Feathers, the pair are given a substantial reward, which pays off their debts. They later celebrate at home with some crackers and cheese. Meanwhile, the Trousers, unceremoniously consigned to the dustbin with Gromit checking to see how much life is left in the remote control's battery, flips back up and walks off by themselves into the sunset, ending the short as the credits roll.

Wallace: Cheer up, Gromit! Surprising what a lick of Paint will do isn't it.

Wallace: It's The Wrong Trousers, Gromit! and they've gone wrong!

Wallace: All's well that ends well that's what I say. Oooh I do like a bit of Gorgonzola. 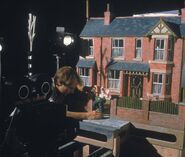 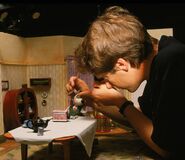 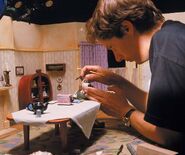 Possibly after finishing the short

Part of the museum set on display at the National Media Museum
Community content is available under CC-BY-SA unless otherwise noted.
Advertisement