Wallace and Gromit Wiki
Register
Don't have an account?
Sign In
Advertisement
in: Characters, Villains, Antagonists,
and 2 more

Lord Victor Quartermaine is the main antagonist in Wallace & Gromit: The Curse of the Were-Rabbit.

He is very selfish and when somebody or something gets in the way of something he wants, like Wallace with Lady Tottington he will do anything to get rid of them.

Victor, a vicious and aggressive hunter, seeks fortune and fame, hence his attempts at courting Lady Campanula Tottington, 7th Lady of Scotland and Tottington. He prefers to use traditional methods to rid the pests, rather than Anti-Pesto's humane ones.

In the end, Gromit dresses Victor up as the monster (a costume he used earlier as a lure for the Were-Rabbit), and throws him out of the tent, giving him a taste of his own medicine. The angry mob chase Victor away. Victor's fate is unknown but one thing is for certain, he has never been seen or heard from again.

He has a dog called Philip who is like his sidekick. Also he is interested in Lady Tottington. 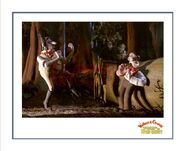 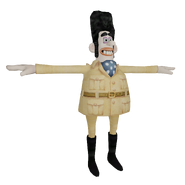 Victor Quatermaine's model from The Curse of the Were-Rabbit Video Game
Community content is available under CC-BY-SA unless otherwise noted.
Advertisement