Wallace and Gromit Wiki
Register
Don't have an account?
Sign In
Advertisement
in: Films, The Curse of the Were-Rabbit

In this film, Wallace & Gromit solve the mystery of a dangerous garden-guzzling rabbit-like beast while conducting pest control.

The annual giant vegetable contest is on and the winner of the competition will win the Golden Carrot Award. All are eager to protect their giant crops from damage and theft by rabbits until the contest. Wallace and Gromit are cashing in by running a humane pest control business dubbed as "Anti-Pesto".

However, they are faced with two problems. Wallace is getting too much weight and they are running out of space for prisoners. Wallace attempts to use his Mind Manipulation-O-Matic machine to brainwash the rabbits with human logic, such as they will stop rampaging in gardens. While performing the operation, he kicks the switch and something goes terribly wrong. The rabbits do reject vegetables, though soon after, the town is threatened by the dangerous "Were-Rabbit", a monstrosity that devours and devastates vegetation more so than its smaller counterparts. Anti-Pesto also enters into a rivalry with the scheming hunter Victor Quartermaine, (who suggests simply killing all rabbits, and pretends to have a crush on Lady Tottington for her wealth) to capture the Were-Rabbit.

After a fully hectic night-time chasing the creature, Gromit discovers that the Were-Rabbit is, in fact, Wallace, suffering from the effects of the accident with the Mind Manipulation-O-Matic. Victor corners Wallace during the night, jealous of Tottington's growing fondness for him because of his humane practice of pest control (whereas Victor thinks it's more effective to simply shoot and kill them). But then Wallace falls into the path of moonlight and transforms. Victor, having identified the rabbit, goes to Reverend Clement Hedges and gains access to 24-karat gold bullets - supposedly, the only things capable of killing a Were-Rabbit.

During the final showdown, Victor and his dog Philip capture Gromit, who subsequently escapes with the help of Hutch and decides to make the ultimate sacrifice by using the marrow he had been growing for the competition as bait for Wallace who, in his rabbit form, has burst in upon the vegetable contest, causing panic. Victor tries to shoot what is apparently the monster but misses and hits the vehicle. Yet the marrow cannot keep the Were-Rabbit's attention as Victor tries to take the golden carrot trophy from a distressed Lady Tottington while also stealing a large musket. Part of Wallace's personality resurfaces, and his protective instinct kicks in. Wallace ascends to the rooftops, holding a screaming Lady Tottington in his hand, where he reveals his identity. She promises to protect him, only to be interrupted by Victor who impales her hair with a pitchfork, leaving her stuck.

Philip chases after Gromit in a dogfight involving two aircraft. Gromit manages to force down Phillip's plane, causing a fiery crash, though Philip survives and holds onto Gromit's plane. The two begin to struggle using an axe. The fight is interrupted when the plane loses power and Gromit scrambles to pay, until Phillip grows impatient and does so instead. Eventually, Gromit opens the bomb bay doors, causing Phillip to drop and land in a bouncy castle, which he unintentionally deflates with his teeth.

Atop Tottington Hall, Gromit's plane circles Wallace, who clings onto the flagpole at the top of the building for dear life. Victor fires the musket, but Gromit manages to intercept the carrot with his aircraft, saving Wallace. Soon after, the engine fails, and Wallace leaps off to rescue Gromit. He eventually lands in a cheese tent, unconscious, while Gromit survives the impact.

Victor gloats briefly before being knocked out with another large carrot by Lady Tottington, who has somehow freed herself and patched the holes with tape. Victor falls into the tent also, and Gromit, in an attempt to distract the angry mob, throws Victor into the were-rabbit costume and kicks him out of the tent. Much to his satisfaction, Victor is viciously attacked and chased away to his apparent death, never to be seen again.

Gromit, Lady Tottington and the liberated rabbits all mourn on Wallace' apparent death, though Hutch, unaware of his surroundings, comments on cheese. This prompts Gromit to revive Wallace with Stinking Bishop cheese. Despite his losses, Gromit was nonetheless rewarded with his trophy for his courage in the incident. Lady Tottington converts her property into a haven, which was quickly populated by Hutch and all rabbits formerly detained by Wallace, solving the pest problem once and for all. In an alternate ending, Lady Tottington marries Constable Albert MacIntosh, and Hutch explains to Wallace that it would have never worked out of he had married her. 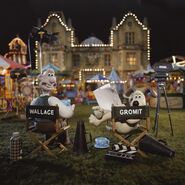 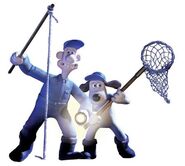 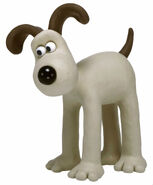 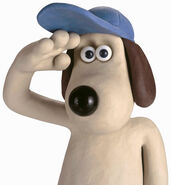 Characters and Props at Aardman Animations and on Exhibitions

Mr. Caliche, Mr. Dibber and Mr. Growbag in a cabinet at Aardman Features

Wallace and Reverend Hedges in a cabinet at Aardman Features

Victor, PC Mackintosh, Lady Tottington and Were-Rabbit in a cabinet at Aardman Features with characters from The Pirates! In an Adventure with Scientists!